My parents were great but could never afford to truly foster any of my talents. (This is not necessarily a complaint because it inspired me to work even harder and follow my dreams and blah, blah…) BUT… I started a lot of classes that I was successful in but inevitably had to quit because of financial reasons. It is my parents’ financial irresponsibility that is the reason I am not a Black belt in the art of Karate today. I taught myself the piano after only a month of lessons. I’ve KILLED it in some very popular LA Karaoke bars after only a few voice lessons when I was 12. I went on to dance in a professional dance company after only a couple tap classes when I was 5. I’m not bragging. This was after years of failure and lots practice later on in life. My pre-teen years were spent an awkward, talentless mess. So, it was really no surprise to anyone, including myself, when I didn’t make the Junior High Cheer team.

All of my friends made the team. It was awful. After a tearful inquiry, the cheer coach assured me I was very close to making the team. (Yeah, right. I’ve been a cheer coach. You can’t just say, “you really fucking suck, honey. Give it up.”) But I believed it. I was still devastated. The cheer team was my ticket to the “cool” table in the cafeteria. The cheer team would’ve prevented the REALLY vivid memories of being called things like, “Dyke” and “Orange Heels.” (“Orange Heels” came about after a combination of sweaty feet and a pair of cheap, imitation Birkenstocks. Long story, but my heels are fine now.) I would have to sit on the sidelines alone while all of my friends basked in the glory that is a “cheer uniform.”  What was I going to do? I was already grade A, 7th grade nerd and not making the cheer team made it official.

I went home that day really upset. My mom, being the great mom she was, dried my tears and told me that I had “more talent in my little finger than most kids had in their whole body,” etc. and that I should focus on something else. But I was too smart for that speech.  I wanted to be popular. That night, I conjured up a plan that would change my life forever. I figured out a way to be with my friends on the court and hang with the guys without actually being on the cheer team. I could be…… the MASCOT!...... Why not? We didn’t have one. We were the wildcats. We had school spirit. The other schools had mascots. I was convinced this was my ticket to cool. I was so….. so smart.

I brought my proposal to the cheer coach the next day. She looked at me with a furrowed eye-brow that, at the time, I thought it meant she was thoughtfully considering what the amazing benefits of having a mascot would be, but now I know she was showing great concern for my 12 year-old self-esteem. “Are you sure?” She asked. “We don’t even have a wildcat costume.”

“My mom can make it!” I exclaimed. (MY MOM CAN MAKE IT? What the hell was I thinking? What kid pleads to be the mascot? Whatever. You live, you learn.) My coach reluctantly agreed.  I ran home to tell my mom the great news. She was incredibly supportive and so off we went to by the “wildcat” pattern and the fabric. We worked all weekend. We were so proud of the costume. It had a large furry belly and striped fabric. It had a cap with furry, short ears that exposed my face.  The mittens were made of fur entirely and the shoe covers had the stripes. In retrospect, it looked less like a Wildcat and more like a Tigerbear. (I invented that animal. Don’t take it.)  But I didn’t care. This was my ticket to the Cheer team. Everyone was going to think I was sooooo cool.


I was nervous at the first game. I realized that I really didn’t know how to be a mascot. Mascots did flips and lead cheers. I just sort of ran around and clapped a lot. I wasn’t asked to go to any of the practices, so I didn’t know any cheers.  It wasn’t until 4 games in I even began to clap over my head. You know, to get the crowd pumped. I didn’t care. I got to go to every game AND every away game. But then, I started to get made fun of…... A LOT. I started to realize that running around in front of your adolescent peers in a home-made Wildcat costume was kind of embarrassing. I thought about quitting, but at this point, I was committed and I was NOT a quitter. So, I embraced it. I made a couple younger kids laugh at the games and that felt pretty good. So, I started to get really silly in my classes. Wearing a costume AND being funny seemed to make more sense to everyone. My grades started to slip because I was more concerned about my next silly escapade than my next test. (As cliché as it sounds…)  I wasn’t even THAT funny. I just did silly stuff. People laughed. I wore a costume. This was now my thing. After two years of mascoting, I hadn’t really improved, but I got voted “Class Clown” my 8th grade year. (Of course I did, right? Tweens seem to really go for the obvious.) I would really have loved some title like, “Best Legs” or “Most Fashionable,” but, how could they see it underneath the costume?

The costume, I’ve realized, was just a mask for my insecurities. You know, “If you’re gonna make fun of me, I’ll give you something to make fun of me about!” I learned a lot though. It motivated me to work harder than everyone else to get what I wanted. I learned to be funny, to be myself, and that I never needed to settle for just being the “mascot.”

To this day, the sound of mittens clapping together makes me cringe a little and brings me right back to the court. 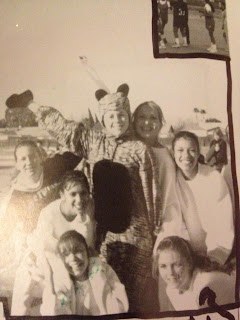