I’ve never been a heavy drinker. I think I’ve had a pretty average drinking career. I started when I was in high school and drank the shitty keg beer and the jungle juice at house parties. When I was 21 and working in a restaurant, nights out bar hopping were a regular occurrence. I went through my mid-twenties, “Sex and the City” phase and drank only Cosmopolitans. Shortly after, I graduated to a cocktail followed by a couple glasses of wine, all of which were chosen carefully and discussed at the dinner table. But, I enjoyed all of these as luxuries, a reward for a hard day at school or at work. Lately, I’ve been going through a phase (or maybe I’m just getting old, but for now, let’s call it a phase) where I just don’t feel like drinking. Ever. It is partially because the hangovers are getting worse and it’s expensive to drink all time but, I also struggle with the feeling that I don’t “deserve” a drink because I haven’t really succeeded in the acting industry… yet. (I will get really wasted the night I win an Oscar. Like, puke in Elton John’s bathroom, proposition Ryan Reynolds for his sperm any way I can get it, kind of wasted.) But, for now, I’ve let up on the drinking. There’s no need. Coincidentally, since I’ve cut down, I have more energy, the dark circles under my eyes are disappearing, and I started a blog. This finds me missing the days spent mulling over which beer to try and which wine will pair well with the night’s dinner. So, I’ve been trying different Root beers, Cream Sodas, Sarsaparillas, and Ginger beers to curb the need to be a connoisseur of some sort. As it turns out, there are a lot of people out there who put a lot of time and effort into the science and art of making these tasty drinks. Finally, a non-alcoholic vice I can be a snot about.

I decided to stop by the BevMo in Pasadena on my way home from work one Friday afternoon to choose some root beers to sample (exciting evening planned.)  I like this location. Everyone is always really helpful without being overly friendly. They keep the conversation strictly to Bev’s. Usually. Today, I headed straight to the soda section and was pleasantly surprised with how many obscure and vintage sodas they had to offer. I grabbed a six-pack carrier and began to search. I had chosen a few already when I heard a voice behind me, “I hope you have the Butterscotch in there already.” I turned to find my friendly BevMo assistant smiling, excitedly. He was probably in his twenties, with perfectly parted hair, a too tucked-in shirt, and the posture of someone who plays video games every second he’s not working.

“No.” I said. “It sounds good though! Where is it?” I was excited. He ran his finger delicately along the wall of sodas until he found ‘Dang! That’s good!’Butterscotch root beer. He pulled it out proudly and presented it to me like a fine wine.

“Oooooo.” I said, my eyes lighting up.

“They use real cane sugar. It is buttery but still has the strong bite a root beer should have. Have a you tried a Sarsaparilla?!” He and I were both excited now! I was going to have BevMo’s resident expert choose the best for me. This was great! Before I knew it, I had two 6 packs of soda. 6 root beers, 2 cream sodas, a sarsaparilla, a bottle of Cheerwine (a southern friend had JUST been talking about it so I had to try it,) and bottle of Moxie, a vintage soda that, according to my expert, “couldn’t be defined by any of the characteristics of today’s sodas.” He insisted I would need to try it myself.

I was so eager to get home and sample, I turned to him and said, “Thank you so much!” And I turned to walked away.

“W…w..wait. My name’s Jason.” I turned around to find Jason with his hand extended toward me for a handshake.

I suppose this wasn’t uncalled for. We HAD just spent a solid 15 minutes discussing soda. My hands were full, so I awkwardly shifted both six packs into one hand and tossed my purse up onto my shoulder to extend my right hand. He was waiting so patiently. I shook his hand and said, “Andrea. Nice to meet you. Thanks again!” I turned quicker to walk away.

“You’re very pretty….” Oh my god. This just took a serious turn for the worse. Can two people of the opposite sex really not have a conversation without one of them taking it the wrong way? I was in full server garb with my hair back in a bun and still had the smell of meat on my skin.  Did he really think I was “presenting” myself for “mounting?” How was I getting out of this? I let out a sigh and was getting ready to interrupt with the “I have a boyfriend” speech…

He continued “and I don’t often meet pretty girls who take such interest in Soda.” Where was he going with this?

In the voice of Sam Elliot from The Big Lebowski: “’Do you have a good Sarsaparilla? ‘Souix City Sarsaparilla?’ ‘Yeah, that’s a good one.’” He quoted. “Ha ha. You know where that’s from?” He said this with a cockiness that was awfully strange coming from his nerdy, little body.

“Noooo.” I replied, wide eyed. What was happening? Was I getting hit on or not?

“The Big Lebowski! Come on! A soda girl like you?” He playfully hit my shoulder.  A ‘soda girl’ like me? What was this guy’s game? His confidence in his “game” was kind of awesome, but I needed to remove myself from this situation immediately.

“It’s been a while since I’ve seen it, I guess.” I turned and started walking this time.

“Well, maybe you should see it again!” He started to follow me. “Maybe we could watch it sometime?” He asked this as I approached the checkout line.

“Actually… I have a boyfriend, so… but thanks anyway.” I said, probably a little too condescendingly with squinted eyes and a sympathetic smile.

“That what?!” I said, a little surprised. “all the soda?!?!” Was he serious?! I knew I was going to regret the inquiry, but I knew what he was implying! What a dick!

“Well, that you were… alone… SORRY….” He said with his hands up like, ‘calm down, crazy woman’ hands, turned and walked away. Why is it sooo weird that I would be buying soda…. BEVMO!? Why would it imply that I was single and “alone?” And why would he take this as the opportune time to hit on a customer? “Aw. She’s buying soda. Pathetic. I’m goin’ in. I’ll impress her with my soda skills, compliment her, and then finish with the Lebowski line.”

“JUST THOUGHT IT WOULD BE FUN TO TRY SOME NEW ROOT BEER!!” I shouted after him, getting my shoulders into it, (were my hands free, I would have sharply waved them, very reminiscent of George Costanza.) I was fuming. I turned to find the people in line staring at me. Now, I was the girl with two six-packs of soda, yelling at the BevMo employees,… who really did have a boyfriend. So, it is not pathetic. (Right?) Sometimes, I just get to that point where, the only way to get my point across is to shout it, annunciated, in a real dramatic fashion. I am an expert in this area.

The BevMo guy was an idiot but he sure did know his carbonated beverages. I’m sure he’ll make some soda loving girl very happy one day. As for me, I’m working on my temper. AND As it turns out, the Soda Jerk was right. The Dang! That's good! Butterscotch Root Beer was the best.  I drank it while I watched ‘The Big Lebowski’ a few nights ago…. WITH MY BOYFRIEND!!!! 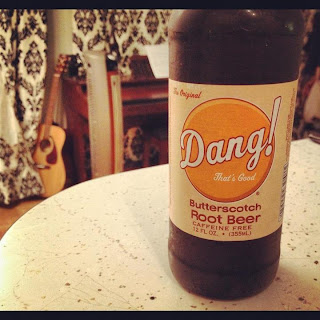